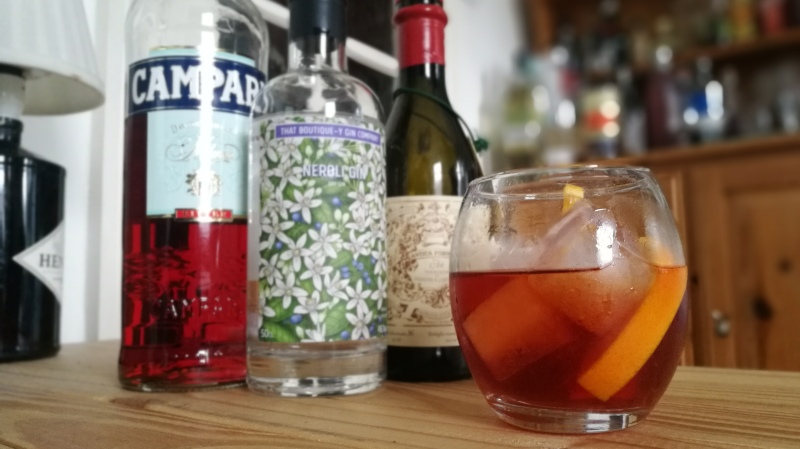 As per the last post, I was intrigued by the Neroli Gin neat, but not won over by its perfumed whack when tried neat. In a G&T there was more room to breathe, but I still wasn’t sure that was the best use for it, so I thought I’d give it another shot – this time in a Negroni. My justification being that Campari and red vermouth would have enough oomph to stand alongside this gin’s perfumed smack in the face.

Largely because it happens to be what I had in, I plumped for Antica Formula as the vermouth to go alongside the Campari and Neroli, but irrespective of that, they seemed a suitably potent combo (Antica Formula is almost too much for a standard negroni) to work with other.

Mixed as a standard 1-1-1 ratio, the three of them sit not so much in harmony as a pleasing war footing – two quite different orange notes coming from the Campari and the Neroli, with the vanilla spice of the Antica Formula rumbling along with the depths of the other two. Great fun, but again, perhaps not the best expression of this gin.

I was slightly disheartened by this, so it was a very pleasant surprise to return to my glass after putting together this post for 30 minutes to find that the problem was that I hadn’t stirred the cocktail enough. This is a Negroni that needs dilution. Once that happens there’s more space for the flavour and aroma and the cocktail balances out.

If it weren’t mid-afternoon and not my bottle to be draining, I have a few ideas for where else it might work, possibly as an accent, rather than the sole gin: in a dry martini; a very perfumed Sour; a Tom Collins and a French 75. Another time, hopefully…

Pour the gin, Campari and Vermouth in a mixing jug with lots of ice and stir until well chilled and slightly diluted (more so than a normal Negroni for this one, I think). Strain into a tumbler which has a few large ice cubes and an orange slice garnish.