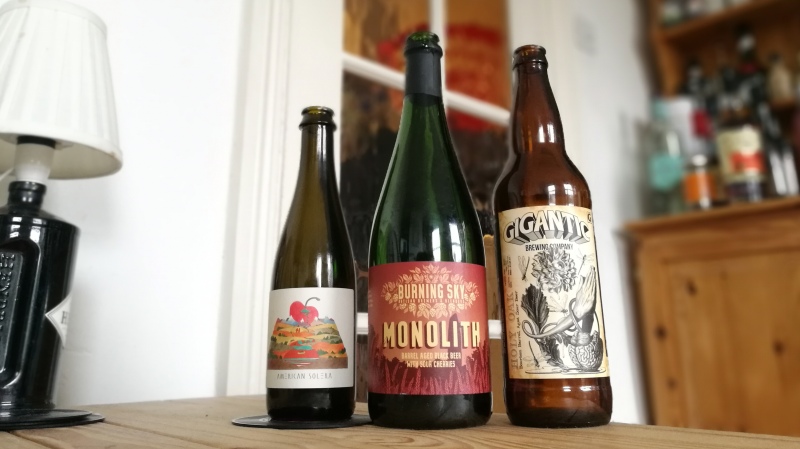 Lee at The Beer Shop London organised an informal bottle share last week, which was an excellent excuse to try some fine, fine beers, contributed by those who attended. While I’m sure you’d like to listen to me go on about how wonderful a load of beers we had that you couldn’t possibly obtain were, I’ll try to keep that to a minimum.

We had the benefit that Lee and Lauren had been on holiday in the USA less than a month ago, so we had a few rather intriguing numbers that came back with them. Unwieldy name aside, the DDH Double Mosaic Dream Imperial IPA from Other Half did the business exactly as hoped, with an extraordinary depth and intensity of flavour and aroma. The New England IPA “style” is vulnerable to mishaps and flabby imitation, so it was heartening to try something so entirely on point and free of silty mouthfeel, Allium hop flavours or sweetness unconstrained by the low bitterness that can happen.

American Solera’s Foeder Cerise was fascinating, as my main experience of wild/sour ales is of Belgian Lambic/Geueze and Flanders Reds, and this made a lot of sense to me as American brewers and blenders defining something that’s theirs, not merely approximating what’s gone before. Fuller-bodied than I expected, it was also powerfully sour, with lactic and acetic notes. The Brett added complexity, but hadn’t had time to remove the sweetness. Sour Montmorency cherries were all over this, accentuating the tartness whilst giving up of waves of cherry flavour that developed into a cherry pit/almond note finish. If I’d known it was coming, I’d have loved to do a side-by-side comparison with a Cantillon Kriek.

Away from the unobtainable-for-those-not-based-around-New-York-to-Detroit, the Gigantic x Magic Rock collaboration, Holy Oak, was described as an attempt to replicate a whiskey sour in a beer. I picked mine up at Master of Malt‘s bin ends selection, figuring that a 7.7% barrel-aged sour wouldn’t suffer for that extra month or two’s ageing. Heavy on the vanilla notes, with a definite whiskey redolence, it worked well in its own right as a beer, while still recalling its inspiration. There was a not-unpleasant sherry note, presumably due to oxidation over time, that affected the purity of the whiskey sour concept, but didn’t hurt it as a beer.

Burning Sky’s Cherry-aged variant on Monolith was also in the mix and provided a contrast to American Solera’s offering. Where Foeder Cerise was bigger that expected on most fronts, the Monolith was contrastingly restrained. It’s a big beer – an 8% black ale given eight months in a Chianti foudre with wild yeast cultures, then another year on cherries, is not one you knock back by the pint. The interest came in how the black beer had enough character not to be dominated by any of the constituent parts, whilst still giving them all a place to complement the whole. Acidity lightened the body whilst the sweetness leavened the chocolate and wine notes, the funkiness and subtle cherry flavours provided a complexity and interest to buttress the comfort of the (roasty notes-free) malt character.

Having failed to keep the beer snobbery to a minimum, I should return to my original point. I got to try these four and a few others, in good company, for the price of bringing a beer I thought would pique the others’ curiosity. There’s a huge amount of novelty-seeking, whale-hunting and box-ticking in the modern craft beer scene and this provided a pleasing way to help scratch that itch without getting overwhelmed.

As to putting one together, I’d suggest everyone brings one sharing bottle or two 330ml. Hold it somewhere where everyone can fit around the same table, or at least talk with each other. Keeping it at less than 9-10 people makes it more manageable and keeps measures large enough to be worthwhile. Having a jug of water at hand helps too, both for refreshment and to mitigate palate fatigue. Sample broadly in ascending order of strength and heaviness – imperial stouts don’t really set you up for taking in much of a light pale ale. Probably best to have lined your stomach before you get stuck in, and no-one will object to snacks during the drinks, either.

It’s not how I’d like to enjoy beer on a very regular basis, and certainly not exclusively, but they’re fun. If nothing else, it’s a format that might allow me to tidy up a ragbag collection of dubbels and tripels remaining from trips to Belgium over the last two years – I just need to dress it up as a vertical tasting and we’re away!